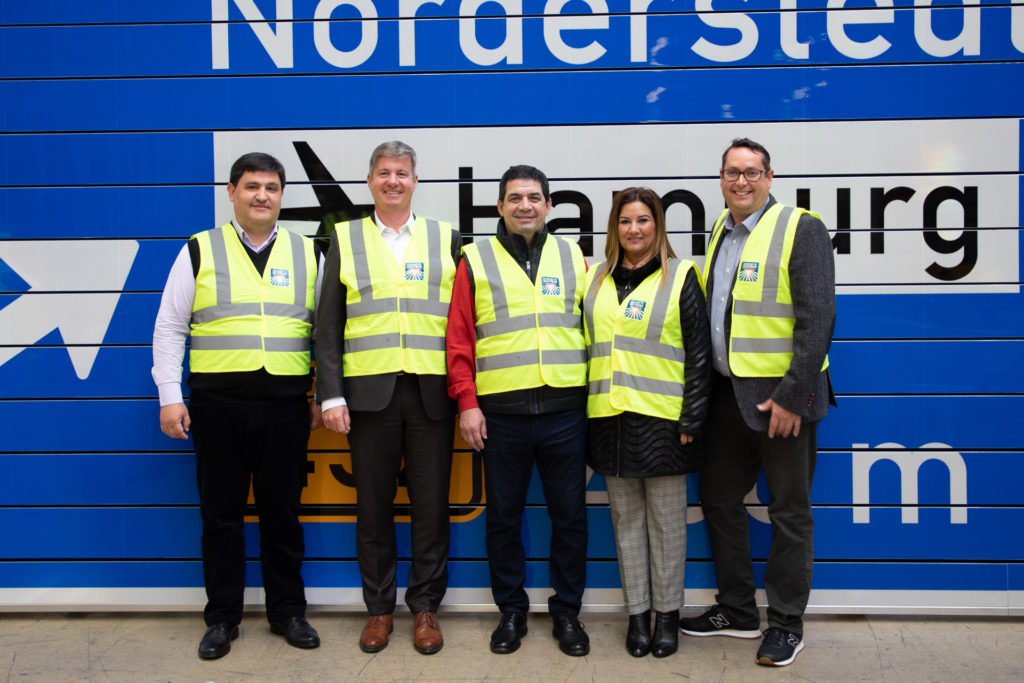 DKT Deutsche Kennzeichen Technik GmbH presented innovative transport technology and smart city concepts from the two market leaders Bremicker and Kroschke to the vice-president of Paraguay and his delegation.

Ahrensburg, 10.10.2019. The vice-president from the Republic of Paraguay was visibly impressed during his four-day delegation trip and the visit to an innovative and fully networked motorway bridge on the A99 bypass in Munich. The modern transport system was developed and produced by Bremicker Verkehrstechnik in Bavaria. The currently state-of-the-art and one of the largest sign bridges spans five lanes, is walkable and houses variable LED display technology as well as a variety of sensors and cameras for traffic monitoring.

The future trend is clear: intelligent and networked LED technology, coupled with digital sign printing. DKT Deutsche Kennzeichen Technik, as a project and sales company from Wolfertschwende, with the parent company Bremicker Verkehrstechnik GmbH in Weilheim, show with the modern motorway bridge of the A99 what the demand for future smart transport solutions is .

The size and range of traffic signage do not matter, as the company Bremicker carries out the construction and statics itself. “It is about improving road safety as well as including the data of motor vehicles and their traffic flows in the future,” says Bernhard Gött, Managing Director of DKT. “Especially for Paraguay, we present flexible and country-specific solutions,” continues Gött.

The term “smart city” has also long been used in Latin America and is a major topic in future infrastructure projects. For example, the delegation in Bavaria was presented with forward-looking projects such as the introduction of e-buses in local transport, safe registration systems and the registration of vehicles, as well as networked traffic information systems.

The city of Munich then invited the delegation for a guided tour of the city’s traffic control centre. “This is where the extent of modern transport technology really comes to the fore. This makes the flexibility and further development of traffic signage all the more important,” says Felix Schaumberg, Managing Director of Bremicker Verkehrstechnik. The fact that the delegation trip from Paraguay was a complete success is shown by the reactions of the participants from politics and business. Concrete projects have already been planned for the country of Paraguay and DKT will now start implementation with the local ministries. “We are looking forward to transferring “Made in Germany” to Paraguay with the aim of improving road safety and the high quality standards,” said Gött at the closing delegation ceremony.

Background:
Paraguay’s infrastructure project offers enormous opportunities for DKT Deutsche Kennzeichen Technik. The economic power has become steadily more stable after good growth in recent years and the government wants to push ahead with infrastructure projects and take the lead in the Mercosur states. The Latin American prestige project Bi-Oceanic, a connection through four states between the west and east coasts, requires a new road network with state-of-the-art traffic technology, which is about 650 km long.
The capital Asuncion also wants to modernise due to increasing traffic volumes and follow Western examples. With the planned introduction of e-mobility in the field of local public transport, the DKT was already able to score points during a visit. Flexible dynamically networked traffic technology products and “smart city concepts” are in high demand.